Tourist in My Own Town on the 4th of July

Until this Fourth of July, the last parade we saw was an equally patriotic Anzac parade in Winston Australia over five years ago, in April 2017. Unlike the Anzac predawn ceremony in New Zealand, we lucked into the one in Winston.

I exult in the fact that I can see everywhere with a flexible eye; the very notion of home is foreign to me, as the stae of foreigness is the closest thing I know to home.—PIco Iyer

The Dalles, Oregon is a small rural town, with a population of roughly 18,000. I've learned I need to ask my neighbors the details of local celebrations, where announcements typically do not include where the event is. I guess the assumption is if it's a local event and you're local, you'll just know. Then I find out how much is done by so few folks and I remind myself to be more charitable about how events are communicated and figure rather than complaining I need to contribute.Patriotism is palpable in this proudly historic town an hour and a half's drive from Portland, Oregon. Political parties, DAR, Daughters of the American Revolution also participated in the parade.
The town is chock-a-block with architecture dating back to the 1800s and 1900s as well as petroglyphs and other signs of early Indian civilization. I'm excited to learn more about it. 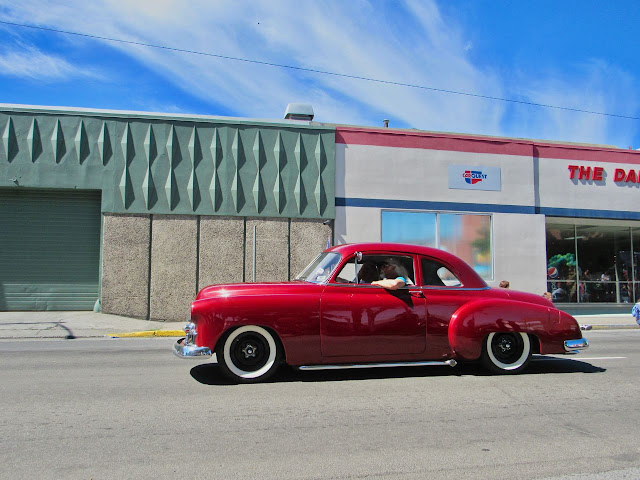 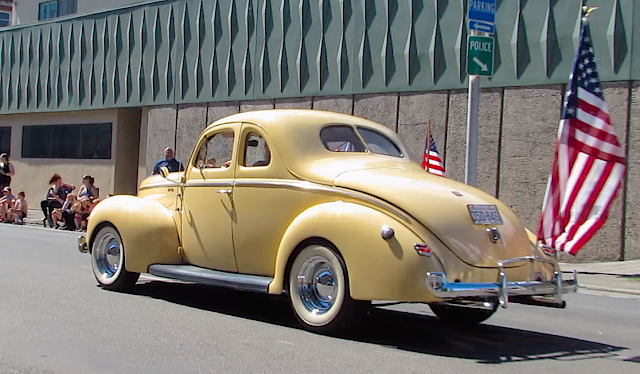 Antique cars are popular here. The parade is just one of The Dalles venues to show them off.
A number of small businesses that serve The Dalles area also participated in the parade.This helpful fellow's "float" design likely required the least effort, offered the most service and gave me the biggest smile.
Both my parents passed to TGB (The Great Beyond) in 2018, but I'm sure my dad, who would've been two years shy in age of the parade's Grand Marshall and was also a WW2 veteran, would've cheered the Marshall on. In my heart, both my parents enjoyed this parade with me.  They also would've appreciated that the parade was as short as it was sweet. No problem getting a parking space a block off the route or finding a spot to sit down and enjoy it and no traffic jams leaving it. I heard this year's parade was much smaller than the Cherry Festival Parade and smaller than prior years'  Independence parades. I have no basis of comparison, so I could simply enjoy this friendly slice of small-town life.
Just as I knew The Dalles parade started at 10 am—but not where—I also knew the Dalles fireworks were at 10 pm and would be fired off of a barge near the dam, but didn't know where best to view them. Once again, my neighbors in the know came to our rescue. Go to the college, they said. As we wound our way up the aptly-named Scenic Drive, we stopped short and followed the small herd who decided that was the place to stop. Good call.

"We gotta come up here sometime during the day just to enjoy the view,: Wayne said.

I started to queue up my camera to take in the fireworks show, but after a few shots, decided to follow Wayne's advice and enjoy the view with my eyes, instead of through the lens of my camera. If you're hankering for some fireworks, check out the show from another small town, St. Helens, Oregon, 2019.  If you don't like bagpipes, turn the volume off when you watch!

As I heard this year's show conclude to the strains of "I'm proud to be an American," I confess to cringing a bit. Of late, I've felt far more comfortable in other places than in our own country. At the same time, I want to believe we can be a nation united with room enough to accept our differences, maybe even enough to finally make Puerto Rico our 51st state.

Figured I needed to get this out on my last "free" weekday. I start a new full-time job tomorrow! More about that and some recent travels and local explorations soon.