And then . . . continued from Part 1 (our most recent migration was prompted by an eviction notice)

At the Florida co-op we'd planned to call home, our best friend there got kicked out with a 24-hour eviction notice for what we considered no real reason. We were upset about our friend. We were freaked out—what assurance did we have the same thing wouldn't happen to us?

In fact, when Wayne spoke up about it—or, in his words—"Lost his sh*t,"—that's exactly what happened. One day later, he got a 24-hour eviction notice, something that's never happened to either of us.

We had no Plan B.

Despite liking the concept of a co-op, the reality was far from ideal. After the co-op, we wanted control. That meant living somewhere we felt we were free to express our beliefs on what we felt was right without fear of repercussion. That meant buying a house and no co-ops or HOAs. We decided to move closer to friends and family.

We talked to Aaron, our financial planner, who helped us figure out how to afford the five years of travel we started back in 2012.

Meanwhile, the folks we sold our trawler to offered it as a place for us to live aboard while we house-shopped. The boat was still exactly where we live aboard and sold it from in Portland.It sat empty and would be until May. We had someplace to go to.

Once again, we needed to get us, our "stuff"—not much, but more than fit in our sedan—cross-country. We also now had a kitty, too. We bought a RoadTrek mini campervan.

Wayne drove the RoadTrek, and I drove our sedan, a nuanced repeat of when Wayne drove the RV from Portland to Florida, and I drove my hatchback. We knew we wouldn't want the van to be our primary transportation once we arrived in the Portland area. With everything else, selling our car in Florida then buying someone once we arrived was more than we wanted to take on. Besides, if we filled the car, there was more room for sleeping in the van.

There's a reason we fled living aboard a boat in covered moorage in the Pacific Northwest in the winter. It's cold, dark, and damp.

It didn't help when the marina cut off the water for a week and a half in December when it was freezing. Out of sheer luck, we barely found out in time to top off the boat's water tanks.

Not knowing whether one more toilet flush or glass of water would use up the last of our water makes me cranky.

Being cranky in a small space is bad.

Another friend bailed us out—again.
"I got this RV I'd love to get off my property," he said. We offered to do just that, promising to either buy it ourselves or sell it and give him the sales proceeds. He hates the sales process. We've gotten pretty good at it. In fact, it's already pre-sold (with a growing waiting list) for more than he expected to get for it.
We focused on finding a home in The Dalles, Oregon, because it's day trip-able to the Portland-Vancouver area where friends and family live. The Dalles also boasts more sunny days and lower prices than the Portland-Vancouver area. We aren't "building careers;" The Dalles is big enough for us to find jobs that will meet our needs. House-hunting, in case you haven't heard, ain't easy these days. Despite escalating prices and climbing interest rates. demand far exceeds supply. Most decent places we looked at went from posting (on Redfin, which we found posted new listings the quickest) within three days. Most places generally sold at the asking or over-asking.

The first house we bid on we only saw in a Zoom walkthrough because I-84—the highway between us and The Dalles—iced up and closed. We made an over-asking price bid with a $40K escalation clause and still lost the bid.

The second house we bid on with the attitude, if it's meant to be, it will be easy. We lost that bid, too.

The third time, we bid on a fixer with a deflated Santa still in the yard in February. Then there was a pool with no recent service records covered by an ugly opaque brown tarp, weighed down by a cardboard box suspended halfway between the pool surface and the pool bottom. We were too distracted by the six chickens chasing us around the yard and dodging animal poop to take a peek beneath the pool tarp. We couldn't inspect the pool because it was winterized

Our over-asking bid was accepted. The only concession the seller agreed to was a professional cleaning prior to closing. Their compliance with that is debatable. We closed anyway.
We never pictured ourselves in a rancher, but there you have it.

The chickens were gone by closing.

We're waiting until the oak floors get refinished before we move in, which will happen later this week.
Other than the two used recliners and one used desk chair from an estate sale, and my in-laws regifting Wayne's former couch and matching chair back to us, we have no furniture.
We thought we'd move furniture into our garage while the floors are getting redone, but the spring on the garage door is broken. We decided to pay $400 to replace both springs, rather than pay $3600 for a new garage or wait 5-7 weeks for one less expensive. The repair is about a week out.
We've gone all the way around the house to move what we have so far, moving it in through the sliding glass door into the bonus room with a laminate floor, not in need of refinishing.
Location Location
After fourteen long years without a home base, we're looking forward to being part of a community again, and giving back and paying forward in the spirit of those who've generously supported us. Our home is now The Dalles, Oregon. 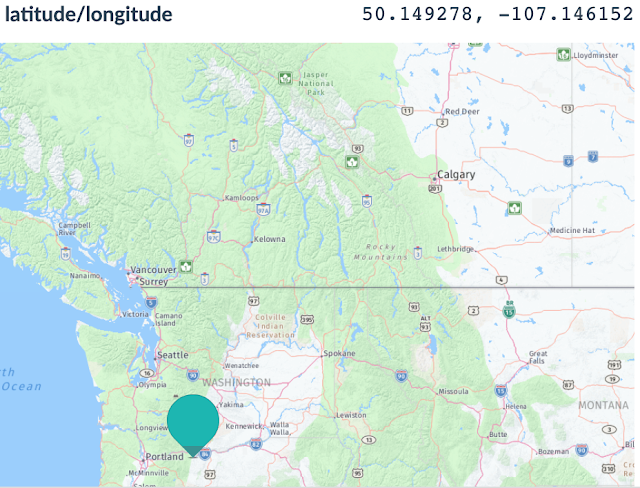 What's Next?
Are there adventures ahead, besides remodeling and returning to (paid) work?We certainly plan on it, though it may take us a bit to get our new-to-us home ship-shape first and getting past feeling "house poor."
Oh, and there's a book and a sitcom script in the works. The former got put on a back burner with our constant moving. The latter was inspired by some of it. Please drop me a line if you want to be kept in the loop on those at dana "dot" greyson at .gmail.com.
Some Questions for You
GalleyWenchTales at 8:21 PM
Share