In our waning days in Fiji, we opted to cross Yalobi Bay to join our friends Lizanne and Giton on Bidule happily anchored off Waya’s Yalobi town.  We enjoyed our time with them in Suva and the Kadavus, and were happy to reconnect with them before they headed off to New Caledonia.

Lizanne explained they were thoroughly enjoying the village of Yalobi.  When a village woman mentioned she could use something for her father-in-law’s aching leg, Lizanne provided aspirin.  Whether the effect was placebo or pharmaceutical, it was enough of a “miracle cure” to get the formerly prone villager up and walking around again.

As a thank-you, Lizanne and Giton were treated to a home-cooked meal.  Giton, ever the master fisherman, contributed his freshly-caught fish to meal; Lizanne, brownies.  When Lizanne asked where she could hand wash some laundry, wen the time came, instead of showing her, the village woman insisted on washing Bidule’s laundry.

“You are the first white woman I’ve had the chance to befriend.  I’ve always wanted to, but most yachts just stay one day, then leave,” she confided in Lizanne.  “Well you got one now,” Lizanne assured her, emphatically.

After our awkward experience on Wayasewa, we were not only happy to spend time with Lizanne and Giton, but also to feel like we had a clean slate, a chance to redeem ourselves with some Fijian villagers, and Yaolobi struck us as a good place to do so.  Yalobi’s sevu-sevu was also touchingly described in SoggyPaws.


While pleasant, other sevu-sevus were more welcoming.  Perhaps we caught the chief – or ourselves -- on an off day.  Perhaps regular cruise ship visits make sevu-sevu more ora chore than a heartfelt tradition.  Perhaps Soggy Paws bloggers simply were wowed because Yalobi was their first sevu-sevu.

We also find it a bit uncomfortable when sevu-sevu segues into the selling of handicrafts (more on that in a future post), which was the case in Yalobi.  We were grateful for Peter and Katherine of Southern Cross, who arrived to present sevu-sevu the same as us. Peter promptly yet politely expounded on their lack of interest in adding anything else to their limited boat space, already full-up with souvenirs after their extensive travels.

Nonetheless, we all appreciated the opportunity to observe Yalobi’s village life, walk the beach and meet the local folks, even though a substantial portion of that live now revolves around cruise ship passengers.  We also learned in the sevu sevu that Yalobi is blessed with excellent quality, spring-fed water, particularly important given its exceptionally dry climate and remoteness.

Somewhat cynically, Peter  observed “You know it’s a cruise ship stop when you see a thatched hut,” nodding his head at one of the two of them in the village as we passed by.  Indeed, we saw the weekly Captain Cook Cruises purportedly posh Reef Endeavour arrive at Waya when we anchored off Wayasewa.

Nonetheless, Yalobi certainly appears to benefit economically from the cruise ship visits.  There are many nicely stuccoed, painted homes, with names painted on them as prominently as one would a ship's name.  One of the nicer ones sported a satellite dish.  There are a few shack-like buildings in Yalobi, though ironically, it didn't exclude their use of solar panels.  Recharging cell phone batteries we've discovered is a high priority among villagers for solar panel use.

Waya’s also lauded in Soggy Paws Fiji Compendium for its “best snorkeling since Fakarava” information (which we believe provides incorrect location information unless these reefs changed dramatically since that post was written!  Hence my lack of underwater photos for Yalobi Bay).  Peter and Katherine spoke highly of the snorkeling off Waya’s Octopus Resort, where they were the day prior.  While a relatively recent Soggy Paws commenter described Octopus Resort’s cruiser unfriendliness, Peter and Katherine discounted the comments, as they found the folks at Octopus quite friendly. 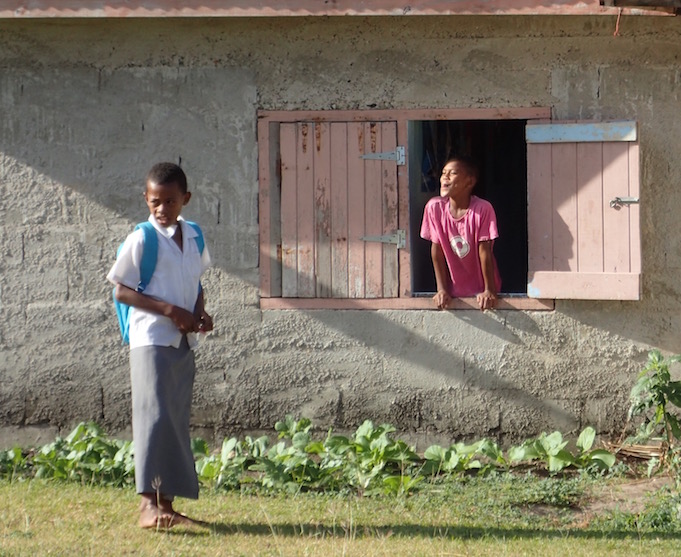 Yalobi’s villagers were friendly.   The children were particularly delightful as was the rhinestone-collared dog who chaperoned us through the village, making us feel like Pied Pipers.  It didn't hurt that Wayne, aka "Lollyboy" came equipped with plenty of lollipops and some balloons to give to the kids.

As well, Yalobi is the school site for Waya, with 182 students attending primary and middle school there.  Those from other parts of the island board there during the week.  Louis, the school's headmaster and his staff, welcomed us and asked where we were from, and were quite happy to answer any questions we had.

The village classes are taught in English, though Louis admitted some children, especially the younger ones, struggle a bit with that, as Fijian is what's spoken at home.  I asked if he found the girls tended to speak English with more ease than the boys, as I'd noticed in most villages, it tended to be the girls who guided us.  Louis agreed, though in Yalobi, it was a 10-year-old boy, wearing a shirt from an Australian bank, carefully shepherding his little brother, who spoke with us the most.  I gave our peanut butter and tea bags to him to share, as he seemed like someone who would do just that.

Louis and the instructors all came from "the mainland," Vitua Levu, from Lautoka, Nadi or Suva, some bringing their children with them to school there, others returning home over the weekends.  The teachers focus on an age group and teach all subjects, rather than becoming subject specialists, teaching across several age groups.  Students who wish to continue their education must go to the mainland for it, and some do.  The hope is that some will eventually return and teach in the village.


Before we began to make our way back to our boats, a couple of the kids shimmied up a pair of coconut trees, each plucked a fresh green coconut and offered them to us as thank you gifts.

As we wandered down the beach, some of the kids trailed us and noticed I was picking up some shells.  They followed suit and offered me the ones they found.


When the time came to push off, the kids helped both Peter and Katherine with their dinghy, then us with ours.

Cruise ship village or not, Yalobi villagers kindness, especially the children's warm smiles and natural generosity is what I will fondly remember most.  The is a genuine sweetness that seems to be missing in so many parts of the the world.  I regret our not spending more time at Yalobi, as Lizanne did, to get to know the villagers better.

One more reason to consider returning to Fiji, the Yasawas and Waya, someday.

Cruising by the Numbers
We cruised just under 440 miles in Fiji, and 280 miles in New Zealand. That Our sail from Fiji to Vanuatu was 525 miles. Our Fiji passage was 1090 miles.  Since our December 2014 – November 2015 10,000+ mile passage from Florida to New Zealand, we’ve sailed just under 2150 miles, most of it in just a few months.  While there will surely be an overnighter or two, we have just two long, multi-day passages left this cruising season, from Vanuatu to New Caledonia, and from New Caledonia to Australia.  We expect to arrive in Australia by December.  There, we’ll sell our boat and return to work somewhere in the world, eventually, doing what, we’re not quite sure yet.  We figure successfully sailing a smallish, 40 year old boat without killing ourselves or each other to about 30 countries in 20,000+ miles should qualify us for something.
GalleyWenchTales at 1:50 AM
Share